I am missing a lot of action in the gaming scene. I haven’t yet got a PlayStation 4, a Nintendo Switch, or a better gaming PC. And yet, all these amazing games are coming out really fast. When Sony launched the PS4 a few years back, I was pretty cool with it, since, hey, it just came out, and there won’t be any really good games out yet. But now is that time, when all the good stuff are hitting the market: Dark Souls 3, The Witcher 3, Persona 5, Legend of Zelda: Breath of the Wild, among other things. Then newer games just came out, “Injustice 2,” “The Surge,” and the improved “Mario Kart 8: Deluxe.”

Ubisoft recently announced that the second Tom Clancy’s Ghost Recon Wildlands expansion, Fallen Ghosts, will be available to season pass owners simultaneously on Xbox One, PlayStation 4 computer entertainment system and Windows PC on May 31, 2017. The expansion will release for individual purchase for all players a week later, on June 6, 2017 for the suggested retail price of $14.99.

Fallen Ghosts takes place after the fall of the Santa Blanca Cartel. With Unidad’s military force unable to maintain control over Bolivia, the country is in a state of civil war. To help restore order, the Unidad enlists cartel members, veterans, mercenaries and criminals from various nearby countries as volunteers. Together, they form a new brutal special unit: Los Extranjeros, which is ordered to track and eliminate all American agents.

In this chaotic situation, the Ghosts have one last mission: evacuate the last CIA members and American civilians remaining in the country. Shot down enroute to their mission, the Ghosts find themselves in the middle of the jungle, without external support, facing deadly enemies equipped with the latest gear and technology. These dangerous elite soldiers are separated into four distinct classes:

–      Armored: Equipped with heavy bulletproof plates, they are especially threatening in close combat.

–      Elite Sniper: Geared up with an advanced movement detector, these Elite Sniper are able to notice far away targets and never miss their shot.

–      Jammer: With a jamming antenna directly in their backpack, they are able to neutralize drones and interfere with all electronic equipment.

–      Covert Ops: Equipped with a new prototype cloaking device that makes them almost invisible and a powerful crossbow, they give a new meaning to the word “Ghost.” 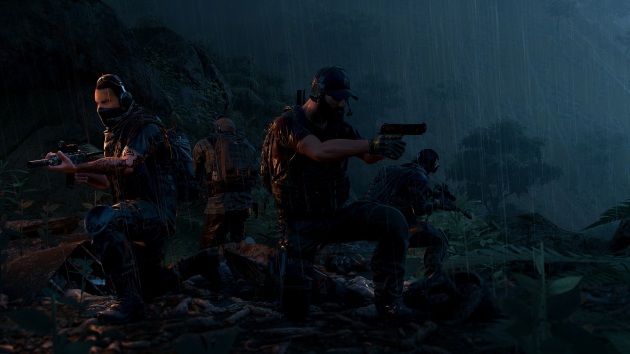 The Fallen Ghosts campaign will feature 15 new missions in which players will have to take down four new bosses located in three different regions. In the expansion, players will start with a new character at level 30 and equipped with all of the main game skills. The level cap will increase from 30 to 35, and players will be able to unlock nine new skills including physical, weapon and drones skills.

Finally, the more hardcore players will be pleased to know that the advanced and expert difficulties have been tweaked to offer an even higher challenge. By turning the HUD off players will get the most extreme and tactical experience possible in Ghost Recon Wildlands.

In Tom Clancy’s Ghost Recon Wildlands, players discover a fictionalized future Bolivia, a few years from now, in which players must take down the Santa Blanca drug cartel by any means necessary. Behind enemy lines, they hunt down targets and discover intel, using any of the more than 60 vehicles available, including cars, motorcycles and even helicopters that they can commandeer. To topple the cartel, players have to fight their way to El Sueño, Santa Blanca’s ruthless leader, by breaking down the Santa Blanca drug cartel’s operation piece by piece as they sever alliances between the drug lords and the corrupted government. A PvP mode for Tom Clancy’s Ghost Recon Wildlands will be available in the coming months.