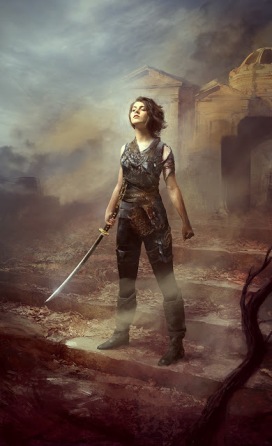 You put a noose around a child’s neck and wait for the command to pull that lever. There must be something evil thriving within, for this child, no more than nine-years-old, to be sent to prison and sentenced to death. Cause no child is capable of committing actual crimes worth being sent to the good ole gallows, right? No? Oh bleed me, how ignorant of you. Obviously, author Mark Lawrence doesn’t give a shit. He likes to write about children and pre-teens doing bad stuff, the kind of stuff you wish your assault bunny could do to your enemies.

The first “Book of the Ancestor: Red Sister” doesn’t stagger or choke. It glides, toes brushing the surface of the lake, cutting the water into gentle waves. It’s beautiful to look, and in terms with the book, once you start, it’s damn near impossible to put it down. I ended up gorging through the pages, chapter after chapter, thinking, “Just one more.” It was like binge-watching “Game of Thrones” where you promise to stop after the next episode and you end up finishing the entire season.

I didn’t find the prose as lyrical or florid as you might find in other books. The words were put together to be straightforward, sharp with urgency, as the pace does throttle, and stops only for a moment to let you admire the world where the story takes place in. And frankly, there isn’t much to see. You’re stuck in a single location for the most part of the book, though the characters leave to go to other places once in a while, most of the exploration comes from the stories the characters tell each other.

“Red Sister” is the introduction of a large world where a thousand stories can take place in. And within the confines of that one location where the characters often huddle together after a long day’s worth of training, mentally and physically, they tell stories, rumors, and what’s up about their families. Together, all these micro-stories weaves into a larger and stronger narrative.

Mark Lawrence is being tricky here. Worldbuilding without actually going anywhere too much. That’s clever. And there are a lot of things in the book that tells us that this isn’t your typical fantasy world. It soars all the way up to the stars and these are the best bits to pick out while reading the book.

And all throughout, “Red Sister” is about building bridges with other people. It’s a story about relationships, about how characters cope with their struggles, how they become enemies to friends – (frenemies in some cases) – and eventually, into a family. Make no mistake, all the characters in this book are different, each with their own little backgrounds and personalities, and almost all of them, are extremely likable. Even the ones that, on paper, appear to be annoying.

But that one thing about this book that really nudged me, were the ninja nuns. Yes, this book is filled with ninja nuns. They throw shurikens and shit. Though while many of the characters remain badass, they are without their flaws, and they get their own asses kicked once in a while.

What’s frustrating here is that, Mark Lawrence had already declared that the remaining two books: “Grey Sister” and “Holy Sister” are already completed. And respectively, will be released in 2018 and 2019. That’s a damn long wait. There’s some serious shit going on by the end of “Red Sister” and it demands to be read immediately. And I’m not speaking about cliffhanger endings, oh no, no. Mark Lawrence puts you in a catapult and launches you thousands of feet into the air, without solace, without anything to hold on to, without letting you breathe.

It’s just fucking good! There’s no other way in how to say it.